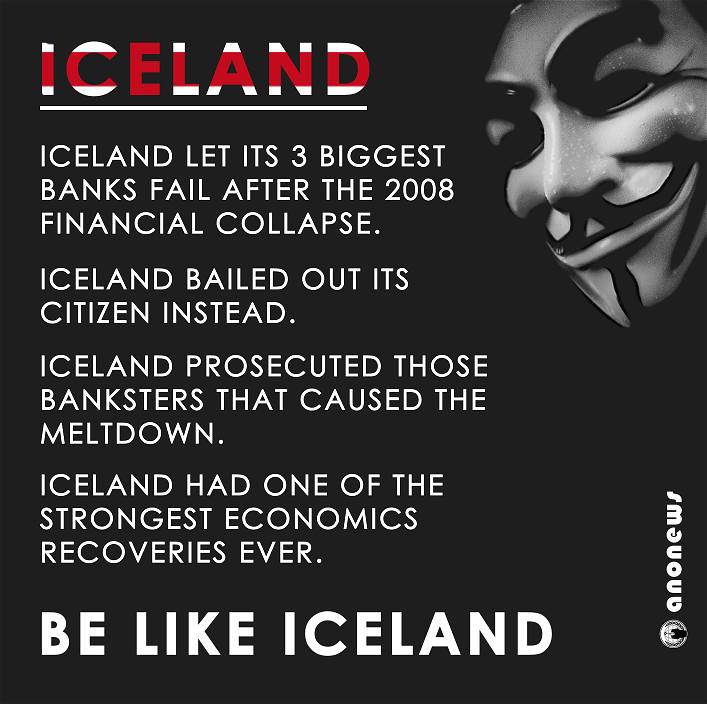 I came across this on a friend's Facebook wall. Another unfortunate Iceland meme. Here's what I wrote:

"These memes are everywhere, alas.

Iceland did let its three banks fail. However, that was only after billions had been poured into the abyss in a feeble and hopeless attempt to save them. Our political elite did everything it could to bail out the banks until the money ran out and our friendly neighbouring countries very sensibly refused to lend us the tremendous sums needed.

Iceland definitely did not bail out its citizens. Purchasing power collapsed 2008-2010 when our currency lost much of its value. This basically means the workers took a huge hit in their standard of living while wage costs for the big fishing industries in Iceland plummeted, delivering record profits to their owners. Currency controls were also implemented and the state sought to repatriate the foreign currency holdings of wealthy Icelanders by offering them a 20% discount on kronas (our local currency). This allowed the wealthy, who had stashed their money in offshore tax havens, to buy up choice real estate and insolvent but viable Icelandic businesses at a hefty discount.

Some bankers were prosecuted, true enough, but for fraud, not for their role in the financial meltdown. They were given a slap on the wrist, received suspended or very short sentences. Most of them are already out of prison. Their reputation may be tarnished, but they still have their offshore millions, which I'm sure must be some consolation.

Iceland's economy has recovered and is growing, almost entirely thanks to the tourist boom instigated by the collapse of the local currency, and the good fortune of discovering new mackerel fishing grounds. However, the tourist boom has also driven up the cost of living, especially in central Reykjavik.

The profits from these major industries -- tourism and fishing -- end up the hands of relatively few people. The fishing industry, for example, is more or less owned by 100 people who don't pay any fees for the right to fish in Icelandic waters and in fact receive various government subsidies. The tourism industry has much more distributed ownership, but the big hotel owners are of course doing well.

Our current government is a coalition government of neoliberal right-wing thieves and ignorant populist/nationalist/racist farming interests. They're slashing social services, destroying our healthcare system, abolishing tax on their rich friends, reducing the extent to which education is free, slashing student loans and privatising them. The businesses that came into state ownership after the crash will soon be "privatised" into the hands of their friends.

Our current finance minister is a white collar millionaire crook connected to much that went wrong in the years leading up to the crash. Our prime minister is some buffoon farmer from the South who cares only for the interests of our inept, corrupt, monopolistic and massively subsidised agricultural sector. The Panama papers recently revealed that many members of the cabinet -- our finance minister, our minister of the interior and our ex-PM -- stashed their wealth in offshore tax havens.

These governing parties -- almost certainly the conservatives, at any rate -- will probably remain in power after the next election. They're still polling at their usual percentage despite a long and dismal history of nepotism, corruption and incompetence.

I hope this gives you some insight into the state of affairs in Iceland today. It's a sad spectacle. I, for one, am moving away. I've had it.