The following passage from William Shirer's Rise and Fall of the Third Reich made me think of FOX News and the obstinate lunacy of the American right.

I myself was to experience how easily one is taken in by a lying and censored press and radio in a totalitarian state. Though unlike most Germans I had daily access to foreign newspapers, especially those of London, Paris and Zurich, which arrived the day after publication, and though I listened regularly to the BBC and other foreign broadcasts, my job necessitated the spending of many hours a day in combing the German press, checking the German radio, conferring with Nazi officials and going to party meetings. It was surprising and sometimes consternating to find that notwithstanding the opportunities I had to learn the facts and despite one’s inherent distrust of what one learned from Nazi sources, a steady diet over the years of falsifications and distortions made a certain impression on one’s mind and often misled it. No one who has not lived for years in a totalitarian land can possibly conceive how difficult it is to escape the dread consequences of a regime’s calculated and incessant propaganda. Often in a German home or office or sometimes in a casual conversation with a stranger in a restaurant, a beer hall, a café, I would meet with the most outlandish assertions from seemingly educated and intelligent persons. It was obvious that they were parroting some piece of nonsense they had heard on the radio or read in the newspapers. Sometimes one was tempted to say as much, but on such occasions one was met with such a stare of incredulity, such a shock of silence, as if one had blasphemed the Almighty, that one realized how useless it was even to try to make contact with a mind which had become warped and for whom the facts of life had become what Hitler and Goebbels, with their cynical disregard for truth, said they were.

The decline of generations

There's a famous American saying: The first generation makes it, the second generation spends it, and the third generation blows it. Often true.

Earlier tonight I was pondering why this might be the case and developed a theory perhaps worth sharing: In reference to my earlier post, I think it may have something to do with increased abstraction, growing distance from the concerns being managed, the shadow-on-the-wall phenomenon.

The first generation, the founder and his kin, starts with next to nothing and builds something enormous, experiencing and learning along the way.

The second generation - the founder's progeny - is raised with some awareness of the family business, brought to work, taught the basics first hand from someone who knows how it's done. Perhaps they acquire, at least partially, the work ethic that lead to the creation of the business in the first place. Never the less, they live their adult lives in luxury.

But the third generation, knowing only luxury and indolence from birth, has no interest in how the family business actually works and is content to merely reap the rewards, thereby squandering the fortune painstakingly accumulated by the previous two generations.

Meritocracy and metrics from a comfortable skyrise office

When I moved to London in 2006 to study philosophy, I audited several additional courses at the university during the first weeks to ascertain which ones were worth taking. One of them was a new, experimental course called "Philosophy and Social Policy", taught by a respected philosopher of science. During the first session, we students drew lots to determine the order of presentations during the semester. Unfortunately, I was first in line.

Although by no means sure I would take the course, I never the less ended up doing the presentation, which involved reading several journal articles on the subject of "meritocracy." As I went through the readings, I found myself strangely in agreement with F. A. Hayek, although I had long ago given up on his classical liberalism, or libertarianism, as a sterile and sloppy political philosophy.

A week later I gave a critical presentation where I argued that, practically speaking, any formal public indicator of "merit" would be useless for public policy-making. It would only end up as an arbitrary and poisonously selective aggregation of other indicators easily gamed by the elite. If it were ever put to use, people would simply adapt their behaviour to the criterion, just as some US students receive expensive private tutoring when they prepare for the eminently "gameable" SAT.

My central argument was that public indices based on ambiguous and unavoidably moral concepts such as "merit" were a terrible idea since they neither would nor could capture what they were supposed to represent. The paradox of measuring and evaluating in the social sciences is that it changes us, the very things being measured and evaluated. This is seldom understood by people making decisions at the top.

The professor did not respond at all well to my presentation and, as I recall, delivered a long and unfocused harangue on how I had a typical "analytic philosophy" outlook. She also questioned me in front of the whole class about the nature of my undergraduate education and on some points of Bayesian probability theory, a topic I did not understand well. I was offended and humiliated by the experience and decided not to take her course.

Now, many years later, I'm reading a wonderful book, Two Cheers for Anarchism (2014) by James C. Scott, the finest thing I have read in ages. Much to my satisfaction, it makes many of the same points as I did in that presentation back in the day, albeit much more intelligently and eloquently.

Scott is absolutely right. One of the true evils of our times is that the people in charge of important decisions live in a fantasy world of statistics, indices and Excel spreadsheets. We humans have become so numerous, and our our social organisation so complicated and hierarchical, that we have to gather data in order to attempt to understand how it all works. But data has no intrinsic meaning and cannot inform without accurate interpretation, without context and experience, without at least some inkling of the underlying social reality.

Still administrative and economic professionals are invariably trained to focus only on the numbers, at the expense of complex, messy, qualitative social context. Most of them don't even have a birds-eye view. They have a shadow-on-the-wall view. Say what you will about the industrialists of the early 19th century, they at least understood many aspects of their business, from the factory floor to the high offices of finance. Our contemporary technocrats and business managers see only partial, Plato-cave-metaphor shadows on the wall from the comfort of their skyrise offices - abstract numbers, statistics, indices, charts, many of which poorly reflect the world of humans. This is the source of many of our troubles.

The Rise and Fall of the Third Reich 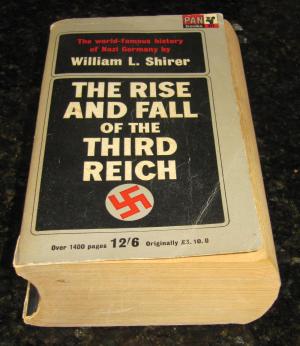